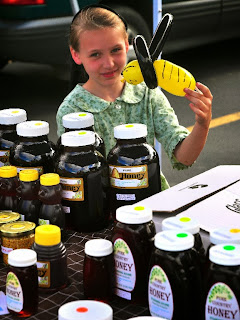 What makes honey more beneficial from other sugars?

Perhaps, most importantly, honey has been predigested by the bees. Refined sugars require your body to convert them to simple sugars which involves taking B vitamins from your body. This will cause people to feel sluggish because of energy expended and the loss of vitamin B. Honey is immediately utilized by the body going directly to the blood stream without burdening the body with converting it to a simple sugar.

There are trace amounts of many vitamins and minerals contained in honey. Honey contains antioxidants, including one that is exclusive to honey called pinocembrin.

Why does my honey have crystals in it?
Don't throw your honey out. It is still good. All natural honey will crystallize over time. This is an evidence of honey in its unadulterated form. Enzymes in the honey cause the granulation to take place. Commercial honey is so heated and filtered that enzymes don't exist so as to not have crystals while the honey is on the shelf. You can melt the granulated honey back to its liquid form by placing it in a container of very hot, but not boiling, water. Many people simply put it in the microwave (top off) on low heat. 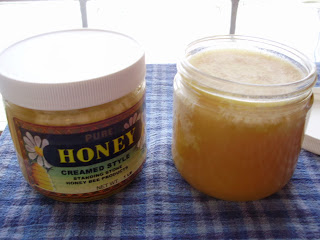 How long will my honey keep?
Honey never goes bad unless it is allowed to collect too much moisture. Even then it won't give you food poisoning, but will ferment, which is the alcohol product known as mead. Honey found in the ancient tomb of the Egyptian pharaoh, King Tut, was found to still be good after thousands of years. Honey is a keeper.

Does honey have other uses?
Honey has been used successfully to treat minor wounds and burns. Honey has anti-bacterial properties because it pulls moisture from bacteria causing it to die. Its PH level also prevents bacterial growth. It even contains a substance that converts into a natural form of hydrogen peroxide. It causes wounds to heal faster with less scarring because of its ability to keep the wounds moist.

Many ailments are said to benefit from the use of honey. Dr. Jarvis wrote the books "Folk Medicine" and "Arthritis and Folk Medicine" which widely popularized the use of honey and apple cider vinegar for many health problems including chronic fatigue and arthritis.
Home
Subscribe to: Posts (Atom)